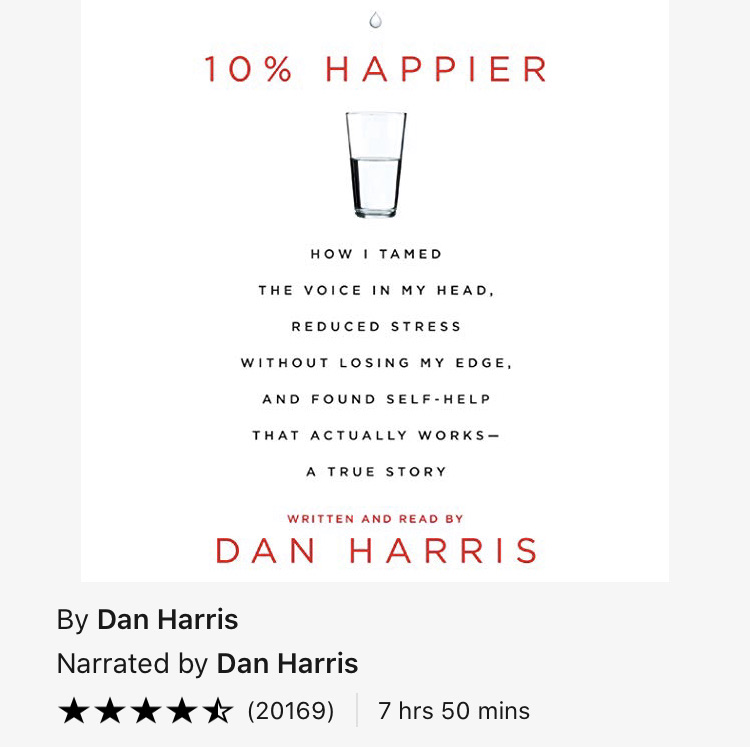 I was looking at different course series available through audible’s Great Courses. One of them was on the topic and science behind Mindfulness. By chance, I noticed a few different people recommending the book, 10% Happier, which is a book for mindfulness and meditation skeptics. I’m not going to lie, I was definitely a skeptic even though I have practiced meditation and mindfulness before, and I have experienced the benefits from it. Mostly, without entirely realizing it. What comes to mind, is when I used to practice yoga and when I was going through different therapies, such as Cognitive Behavior Therapy.

I really enjoyed this book. It’s quite autobiographical in nature and the author does sound like an American news journalist, because he is one. But I enjoyed that aspect. If you want to learn how to start a meditation practice this isn’t the book for you. This book is more about providing a convincing argument for meditation and mindfulness practice and learning about a beginner’s experience with it. Even if you don’t choose to start meditating after reading the book, I still think it is quite entertaining, especially the bit about the 10-day silent retreat. I highly recommend the book because it’s easy to listen to, quite short and at times funny.

“The perfect book for the spirituality sceptics who really do need meditation in their daily routine.

10% Happier is a spiritual book written for - and by - someone who would otherwise never listen to a spiritual book. It is both a deadly serious and seriously funny look at mindfulness and meditation as the next big public health revolution.

Dan Harris always believed the restless, relentless, impossible-to-satisfy voice in his head was one of his greatest assets. How else can you climb the ladder in an ultracompetitive field like TV news except through nonstop hand-wringing and hypervigilance?

For a while his strategy worked. Harris anchored national broadcasts, and he covered wars. Then he hit the brakes and had a full-blown panic attack live on the air. What happened next was completely unforeseen. Through a bizarre series of events - involving a disgraced evangelical pastor, a mysterious self-help guru and a fateful gift from his wife - Harris stumbled upon something that helped him tame the voice in his head: meditation.

At first he was deeply suspicious. He had long associated meditation with bearded swamis and unwashed hippies. But when confronted with mounting scientific evidence that just a few minutes a day can literally rewire the brain for focus, happiness, and reduced reactivity, Harris took a deep dive. He spent years mingling with scientists, executives and marines on the front lines of a quiet revolution that has the potential to reshape society. He became a daily meditator and even found himself on a 10-day silent meditation retreat, which was simultaneously the best and worst experience he'd ever had.

Harris' life was not transformed into a parade of rainbows and unicorns, but he did gain a passion for daily meditation. While the book itself is a narrative account of Dan's conversion amid the harried and decidedly non-Zen world of the newsroom, it concludes with a section for the novice on how to get started.”

I probably should meditate more. Or perhaps that's what I sort of do when I dig into time-consuming nonsense tasks just because I don't reflect upon them before I start. That's when I get all my thoughts concentrated on a single task. Hours or days can pass almost without me noticing it.